I’m so honored when friends stop in to support me at the art show and say hello. But boy am I uncomfortable selling my art to them. Don’t you give stuff to friends? I love my friends and want to give to them, not take their money. . It’s the way I give gifts, which I don’t otherwise give. I really suck at gift giving. So this is really perfect…isn’t it? They pick out what they like, I give it to them – everyone’s happy!! When I explain that, the thought and sentiment behind it, is brushed off.

Then to top it off I had one young lady fall in love with a painting. When she asked how much I wanted for it she lost it. “That’s too low!” she gasped “It should be at least double what you have marked here!” …and then proceeded to pay the lower price. ( -.- shrugg). oh well.

The top picture and at the bottom of the other pic, is a new little kids book I’m working on. It’s about an Ant and an Elephant. Before it’s even done I’ve gotten some interest. Actually someone wanted to buy that unfinished little sketch book. Wohoo! They also like the one about the seagull that gets kicked out of Bologna cartel. He then gets a kid to help flood the market with bolgna to ruin his former comrades. Once that’s done, he starts a new gang that seeks out and hords peanut butter….something like that.

It’s that time of year again. Inktober.  I’ll try to do more as the month goes on but I’ve finally figure out how to illustrate my latest story: The Glass Bottle. It’s a mythology or folklore, something like that. I’m excited about it! Maybe I’ll post a couple of pictures as I finish them. 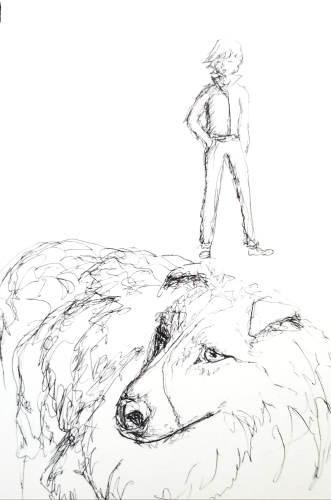